Yaakov had a curio shop which was partnered with a friend. After the friend’s death, the possession of their shop divided into two part; one is Yaakov’s and the other is Yaakov’s son, Noah’s. However, their viewpoint is far divergent making the family bonding be sharply reduced. Chances are the young guy suddenly appearing to work for Yaakov wins Yaakov’s favor. Chances are this young guy’s appearance makes great difference in Yaakov and Noah’s lives.
As a string of things happen to them, secrets behind them emerge. And the conflict between these three men is more and more obvious. How can they deal with the intricateness in their relationship? What choices will they make for every subtle and also important life lessons?

There is restoration for things, in Yaakov’s antique shop, in Noah’s marriage, in Anton’s nomadic life.These three people struggling different dilemma and meanwhile becoming parts of each other’s lives as both destroyers and restorers. In here, the story been narrated in straightforward way expresses how tricky people’s relationship works in sophisticated world. Sometimes, people could not love without hatred, fight, and heartbreak. 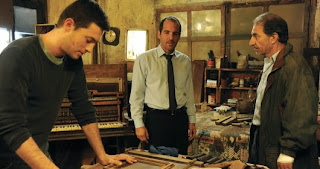